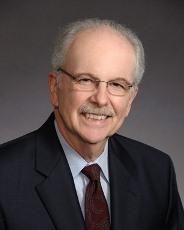 Hal Geiogue brings to the commission more than three decades of experience in formulating education and fiscal policy for the state of California.

He started his public service in 1965 with the state Department of Finance. From 1967 through 1990 Geiogue then served in the Office of Legislative Analyst where he directed a staff of nonpartisan professionals who were responsible for the program and budget review of K-12 education and postsecondary education institutions and programs in California. In 1979 and 1980 he was the co-chairperson of the Student Financial Aid Policy Study Group which helped reform the state’s student financial aid system.

In 1991 Geiogue was appointed Assistant State Treasurer by Treasurer Kathleen Brown. In this position he helped plan and administer the overall bond and cash flow financing program of the State of California including the issuance of $7 billion in long term bonds and $33 billion in short term notes and warrants. Representing the Treasurer, he also chaired the California Education Facilities Authority, Student Loan Authority, Health Facilities Authority, numerous bond committees and was a member of the Public Works Board.

In 1995 Geiogue returned to the Legislative staff where he was the Chief Consultant to the Assembly Education Committee responsible for the overall operation of the committee and its staff activities until he retired.  Hal was appointed twice by Governor Brown to the commission in 2012 and 2015 and has been reappointed by Governor Newsom in 2019.  He was elected Chair in 2015 and 2016 and is the commission’s representative on the ScholarShare Investment Board which manages the state’s 529 college savings plan.